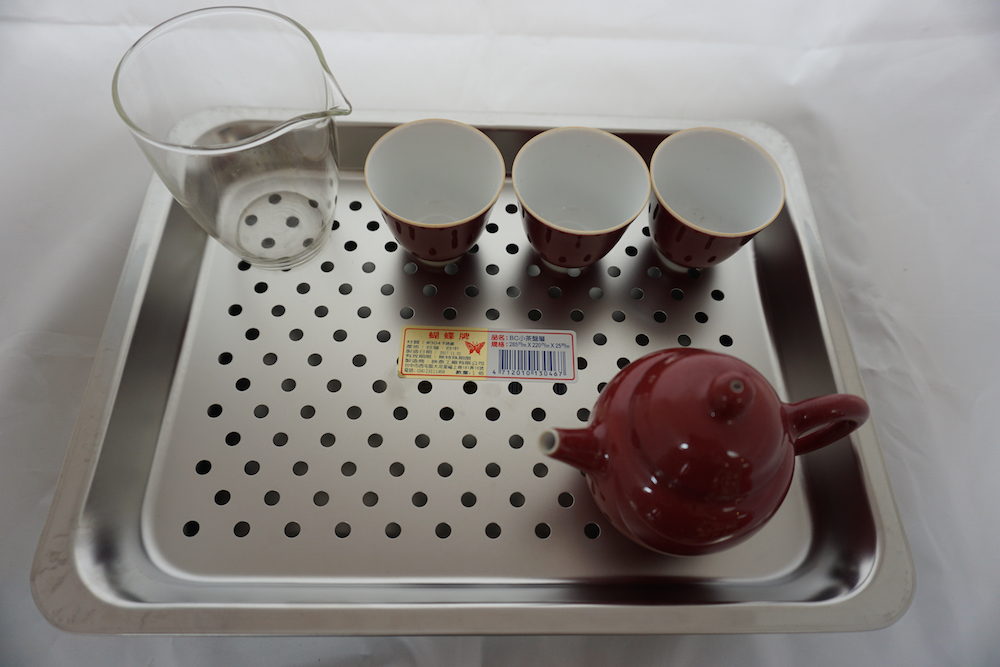 We are getting near the end of our essential tools of gong fu cha. I like to keep it simple and when it comes to brewing tea, oftentimes, less is more. The next piece of equipment that I would consider essential is some type of brew tray. For the most part, people in these parts use a setup that is considered wet brew gong fu cha. For wet style, our tray needs to be able to catch the runover water. It either can catch it and hold it, or catch it and drain it. Dry style is really very advanced, in both skill and artistic presentation. It is almost never seen, because when it is seen, it is more often overlooked.

Taiwan is famous for massive tea trays that are carved into a large piece of wood, that is also a table. This is often done from the huge slabs of juniper that were harvested from the old growth groves that once covered Taiwan. Other types of wood are used, but this cypress or juniper, depending on what dictionary you use, are by far the most sought after. Let us not forget, less is more. I like smaller trays. For me, the ideal tray would fit a pot, a sharing pitcher, and two to four cups. I like this size of tray, not just because it is enough, but also because it is easy to take on the go. I tend to go for trays that catch the water in a compartment that you have to remember to empty rather than trays that drain. Draining trays are less movable and less flexible. They need a place to drain which can be a plastic waist bucket. Draining trays are a good option for an area dedicated to gong fu cha.

It is very difficult to practice gong fu cha without spilling water or tea. So much of the process creates a mess if you don’t have a tray. Pouring over the pot, heating teacups, heating the teapot, discarding the initial infusion if you choose to do so and so on, are all part of the standard gong fu cha practice. A good tray will catch all of this. Another popular alternative to a tray that will catch everything is a dish. Typically a shallow bowl that will catch some of the spillage, and a waste bowl that can be used to discard excess water from the activities listed above.

Even if you won’t spill and don’t plan on wasting any water, the tray is a useful tool. It is pretty difficult to fill a yixing clay teapot with water, add the lid, and not spill. And since this action occurs several times throughout the brewing process, it’s pretty hard not to make a mess. Trays are a nice addition to a table and you can use them to keep and display your tea wares, beautiful and ready to use.